Find A Crew is the world’s largest international online boat and crew network. They boast members from 200 countries and span 5 oceans, with hundreds of people utilizing the service every day. Established in 2004, it quickly became the foremost name in international maritime connections. The service has both free and premium levels of membership and at the time of this writing, 8,043 users accessed the site within the last 45 days.

This exercise was done from personal opinion and has no affiliation with Find a Crew.

After being introduced to Find A Crew by a friend I met while traveling, I spent some time investigating the product. While the function of the network itself is incredible and serves the purpose of connecting members, its existing mobile interface is difficult to parse through while accessing the site on mobile. I addressed some of the issues my minimizing the number of onboarding questions, reorganizing how the profiles are perceived when scanning through a number of them, and by simplifying the main goal of the website – the messenger service with other potential matches.

To keep my redesign in perspective and at a manageable scale, I addressed only the services being used by potential crew members who were looking for boat owners. I began my understanding of the service by showing the existing mobile website to a few of my friends and asking them to talk me through the process of answering the onboarding questions, setting up a profile, sifting through others’ profiles, and finally getting to the messaging service.

I also administered a survey specifically to travelers who had either previously traveled on a boat or were interested in the service. I did this to get abetter idea of what the most important deciding factor was when perusing different profiles.

Survey administered to 20 people who have traveled solo in the past.

Of the 20 people that responded to the survey, a majority said that the pay was the most important factor for them, followed by compatibility with the boat owner, and in third was the distance between their current location and the potential boat’s docking location.

I synthesized information gathered from my interviews and surveys, as well as demographics based on the people most likely to travel and created a user persona. 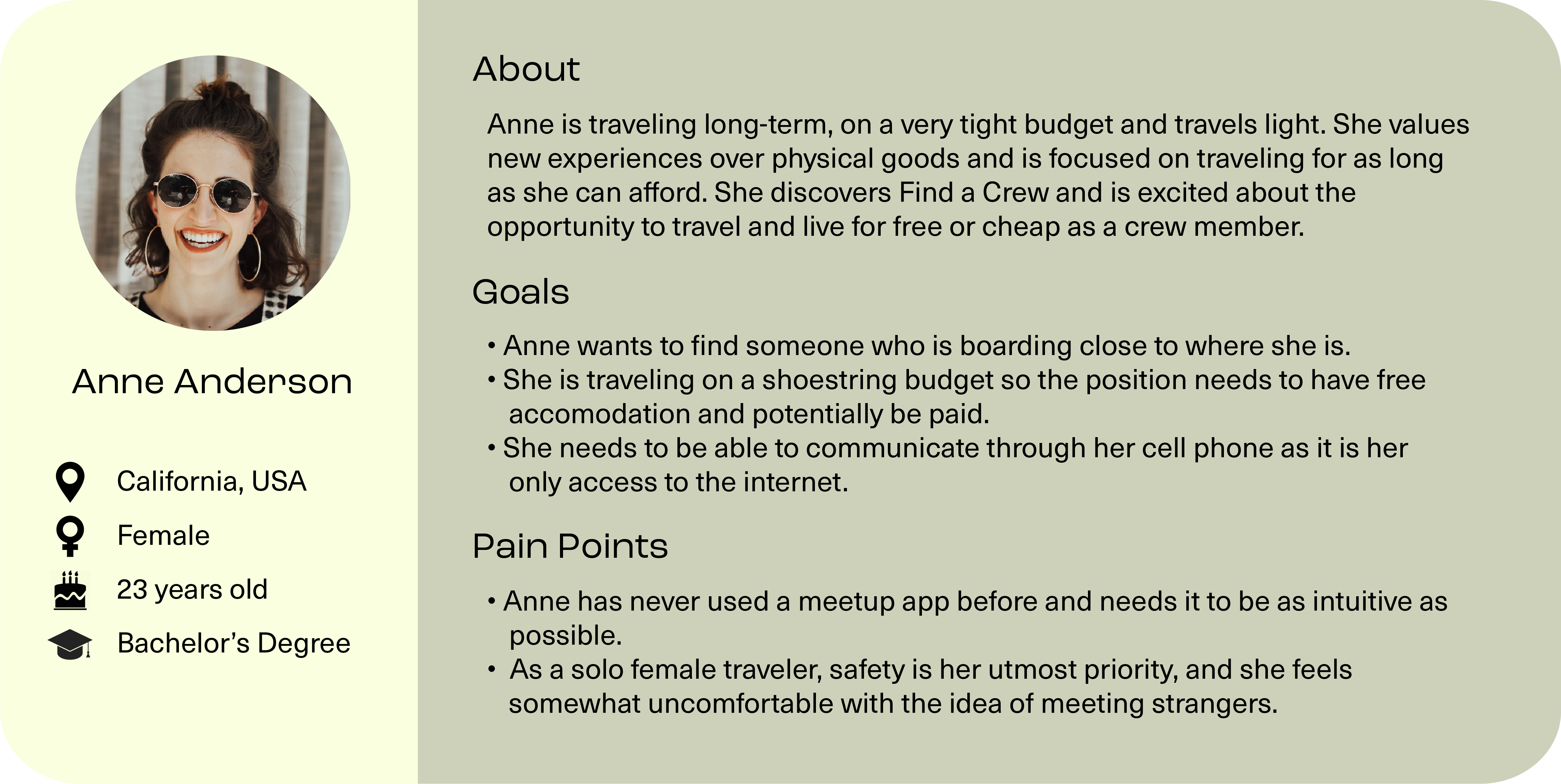 Using this persona, I was able to walk through the process of using the mobile website and identify pain points and the issues that needed to be addressed. Based on the information I gathered from my research, I was able to determine that the main issues with the website were the following: 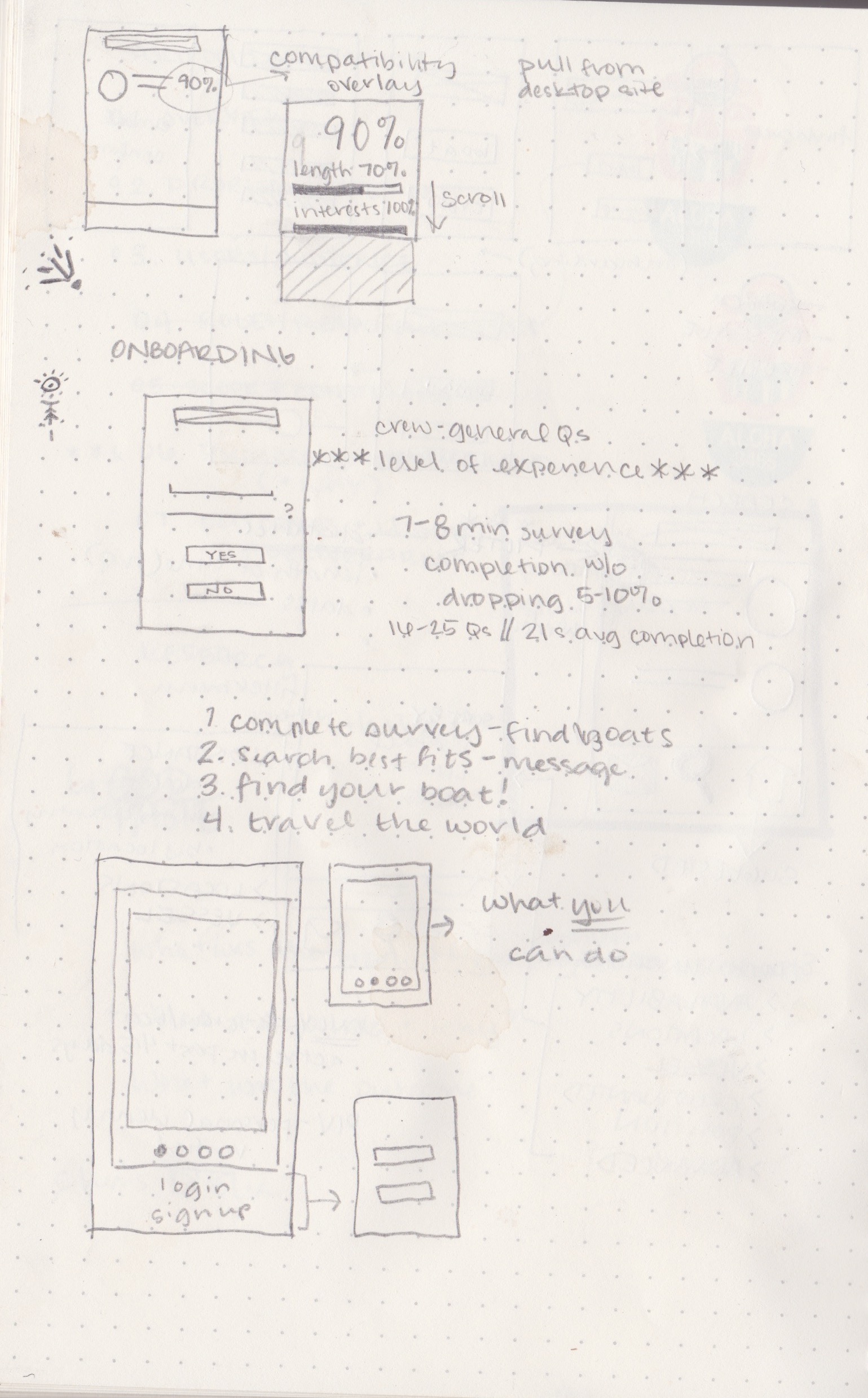 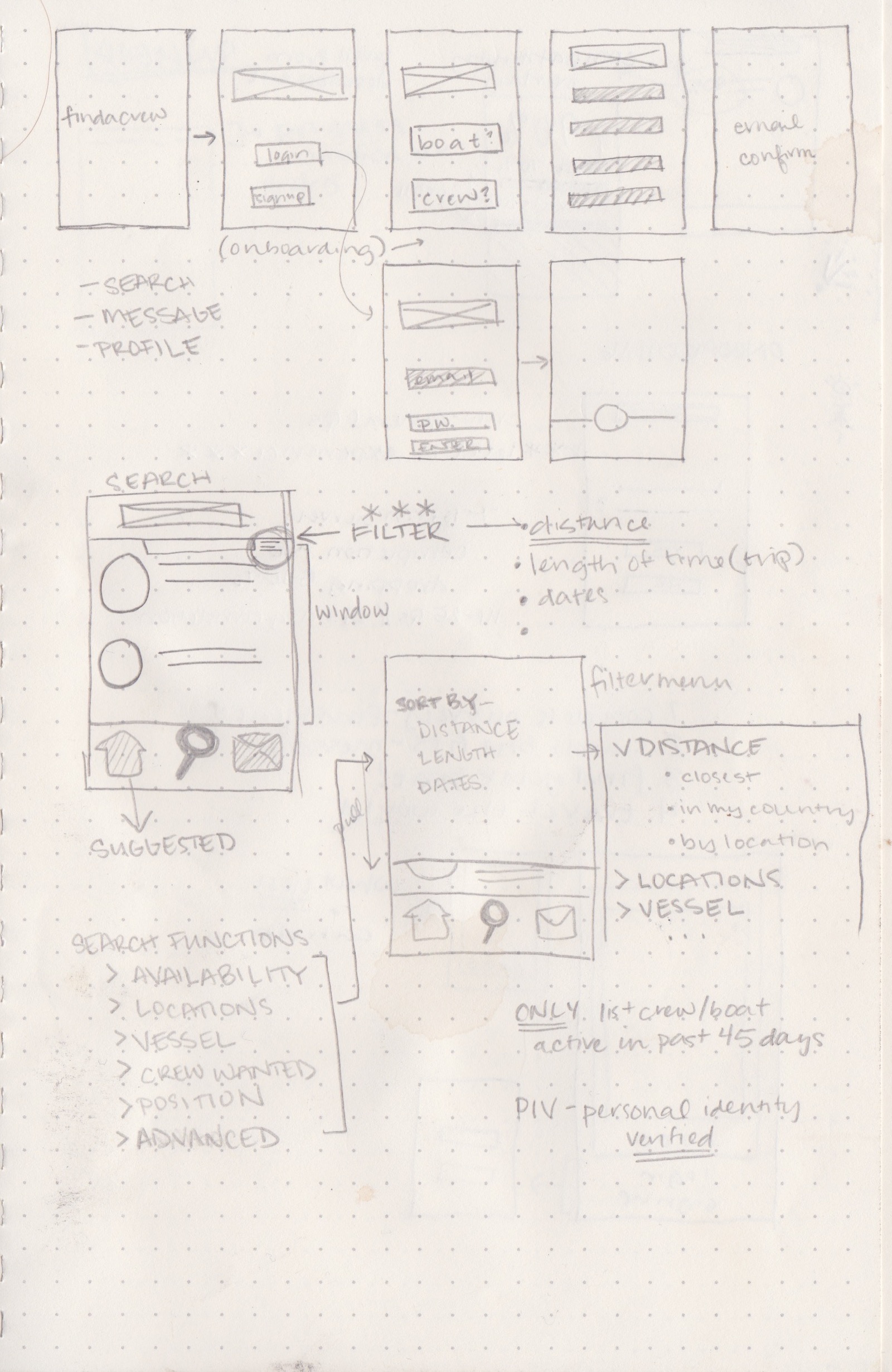 The first issue that I addressed was the overwhelming number of questions posed during the onboarding process. Research indicates that during a survey, questions can be delivered in a range of about 16 to 25. The existing onboarding survey, including a lot of information that was potentially irrelevant to a crew member who had no prior experience, of which a great deal of Find a Crew is comprised, ended up being 33 questions in total. I endeavored to minimize these questions by condensing them into a simple and concise 13 questions with the ability to modify and expand information in the future. 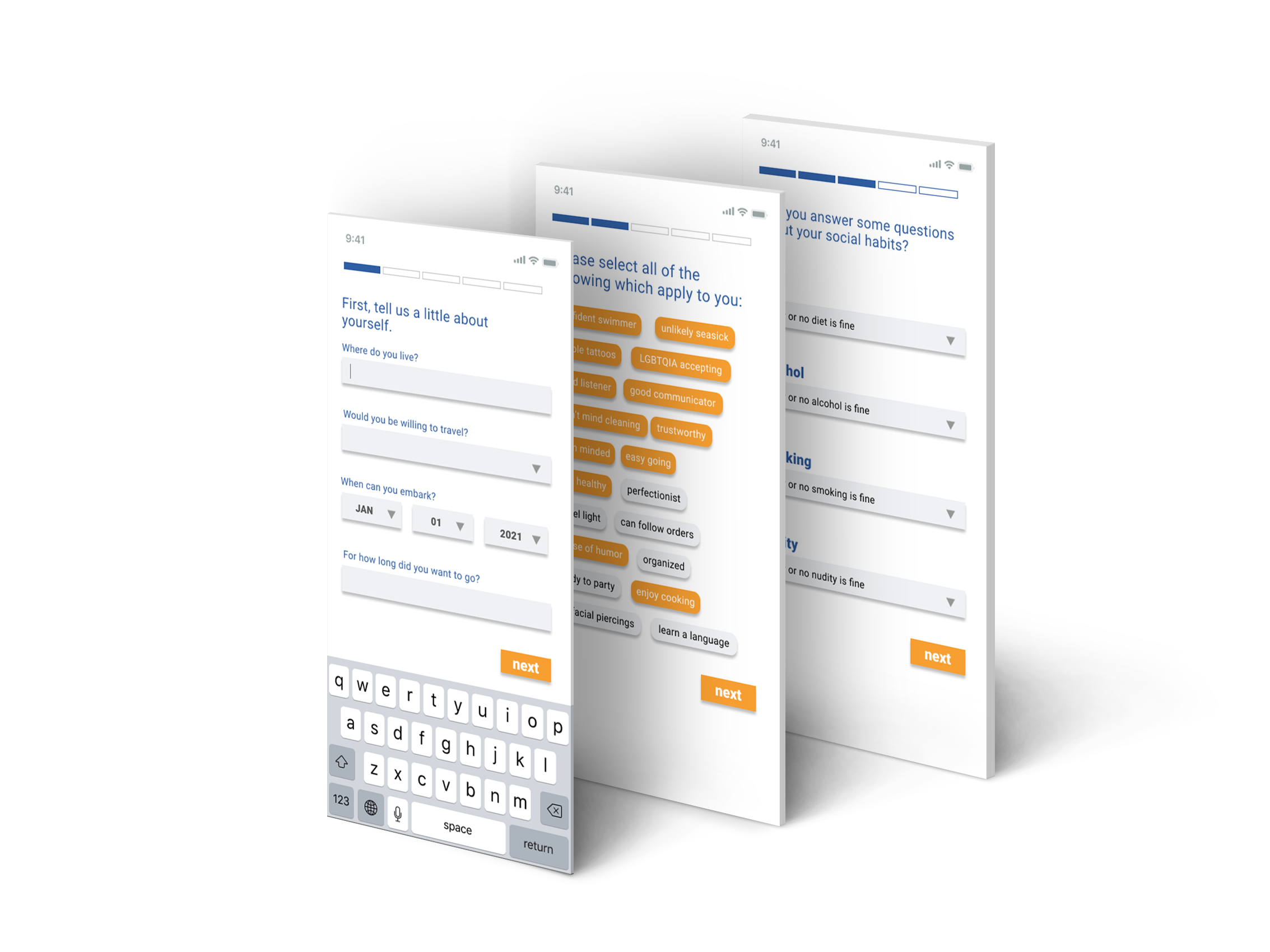 I also reorganized the profile search to feature prominently the most important values to the user, based on survey results, which were the following: whether the position was paid or unpaid, compatibility with potential matches, and finally, the distance from the user to boat’s docking location. 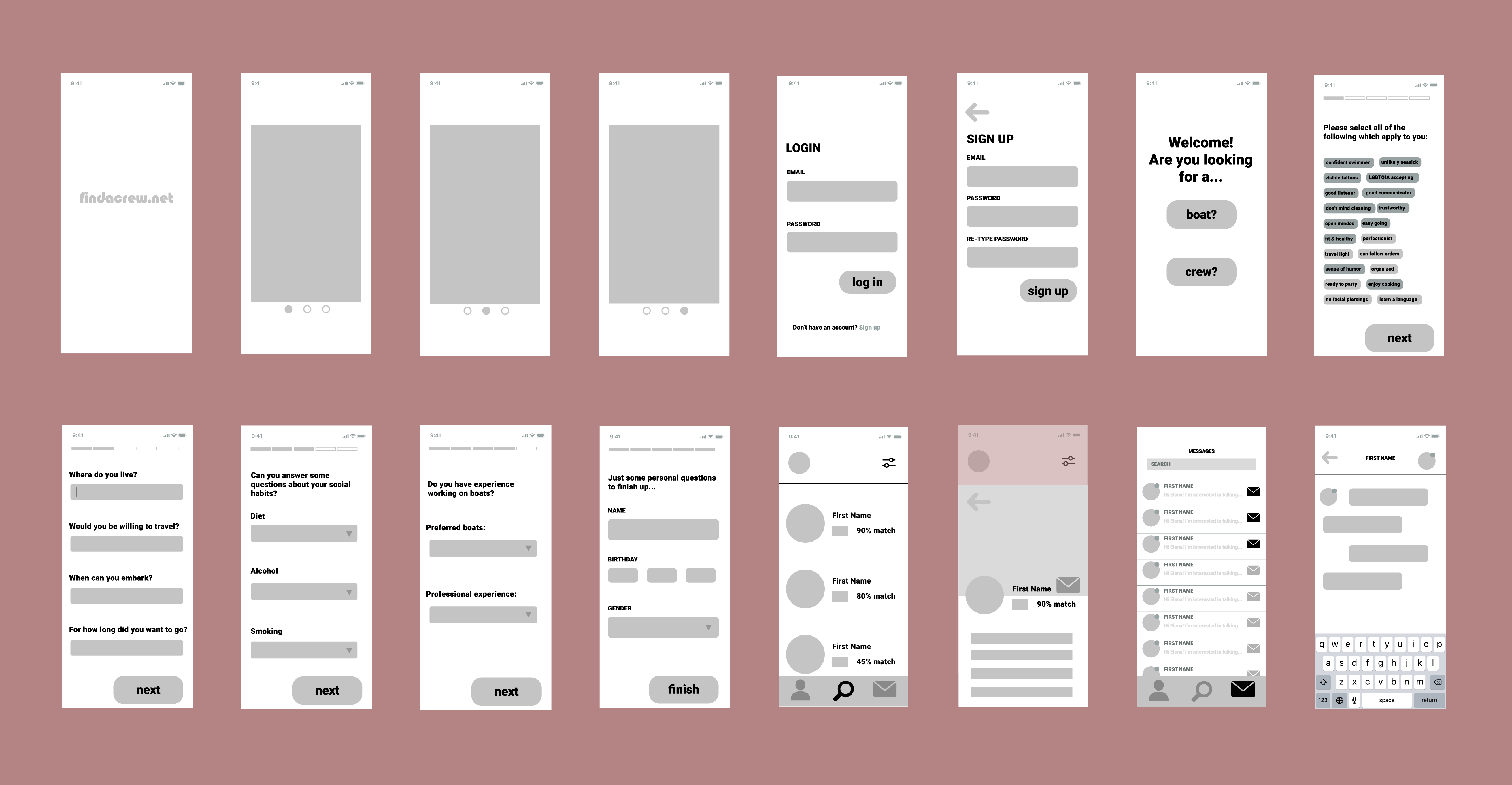 The overall content of each of the app’s pages was streamlined only to include information that was relevant at that moment and could be scanned quickly and efficiently.

I ended up organizing my mid-fidelity prototype according to ideal user journey to better understand how to organize the transitions between pages moving forward. 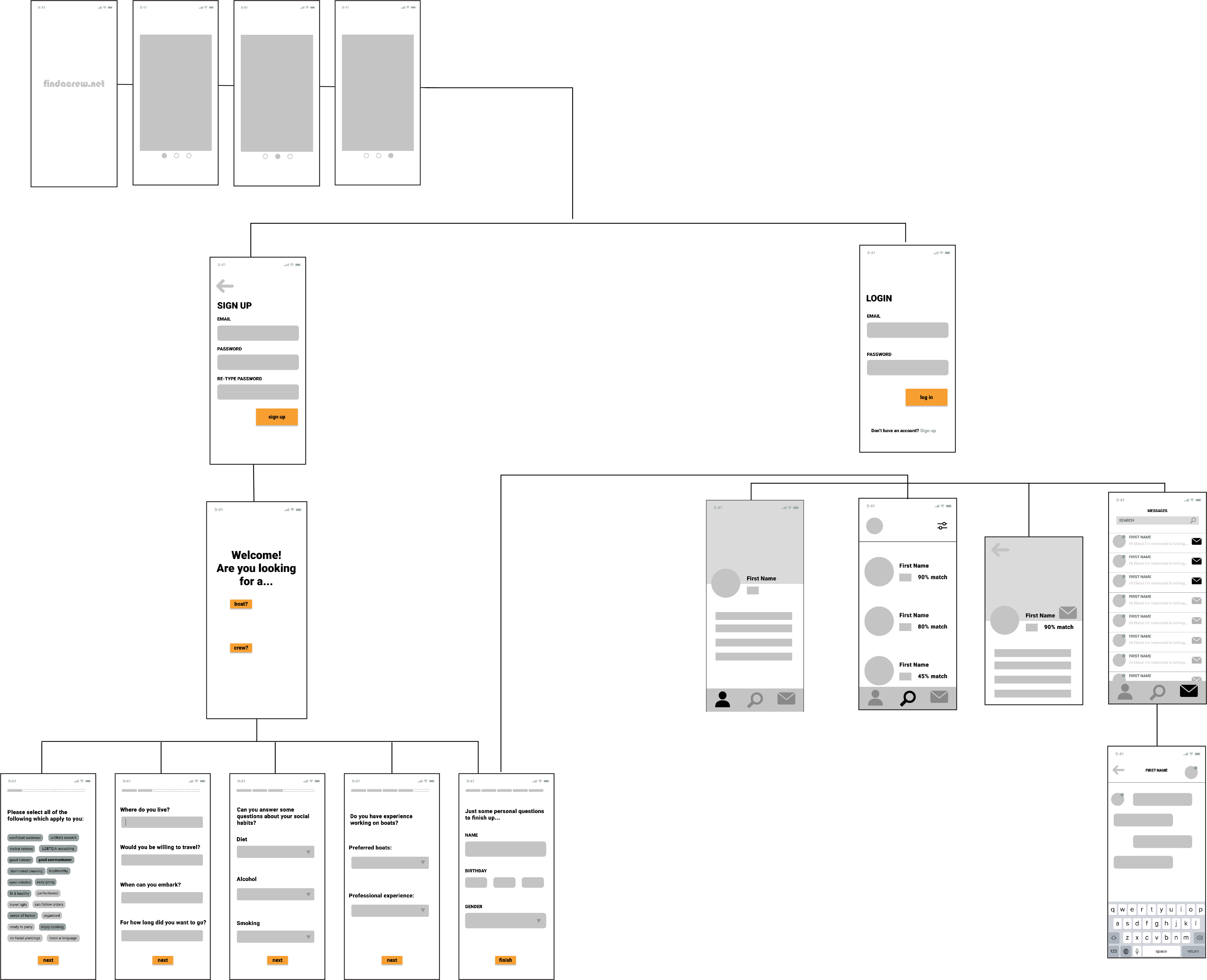 In the process of making the prototype functional, there were a few key issues with UI elements, mainly that the scale of them when using the app was incongruous with the size of the phone and made things difficult to organize hierarchically.

Ultimately there were a few adjustments made to the mid-fidelity prototype: UI elements were adjusted for size, profile elements were switched, and graphic elements were added to increase brand recognition. The high-fidelity, clickable prototype concisely explains onboarding, asks introductory profile questions, allows the user to search through others’ profiles, select one, and message with another user.

In the future, I think searching by map would be a significant feature to add to the application but at this scale it may be cost-prohibitive.